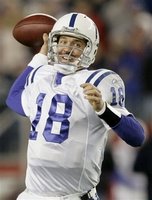 4 - New Orleans Saints (last week 4)...with a bye this week...oops, sorry; they play the Steelers

5 - New York Giants (last week 8)...the NFC will come down to the Bears, the Saints, and Peyton Manning's little brother's team

6 - Denver Broncos (last week 6)...they didn't look TOO impressive beating a Pittsburgh team that beat itself, but Mike Shanahan finds a way to stay in the mix year in and year out

Today I think it will be the
Giants and Colts. A Manning
Bowl!!

In fact Sports Illustrated is
predicting this too. But who
knows?

And there is something about
the Chargers I like too.
Tomlinson is fun to watch.