The Super Bowl champion Pittsburgh Steelers moved up in the first round of the draft today to select Santonio Holmes, a wide receiver out of Ohio State. 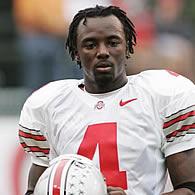 A bold move! While no one can possibly replace Antwaan Randle El, who brought such excitement to the field with his diverse gifts, Holmes looks to be an excellent choice who will fit right in with the world's greatest football team. ESPN says he has, "...explosive speed and outstanding hand-eye coordination." I can't wait to see how he works out (especially since I'll be living 15 minutes from Heinz Field!). 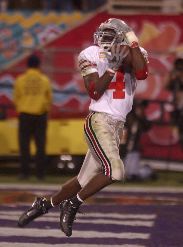 The big story of the day has been that the Houston Texans organization has apparently lost their collective mind. Rather than draft USC running back Reggie Bush - as sure a "can't miss" thing as is possible in the NFL - they drafted Mario Williams, a defensive end out of North Carolina State. BIG mistake, and one that will cost their GM his job in years to come. Williams may well be a great pass rusher, but Bush could have won games.

This meant that Bush was available for the New Orleans Saints, who gladly took the Heisman Trophy winner. It's Christmas in New Orleans! Seriously, hasn't Houston given enough to New Orleans in the past year or so, in the wake of Hurricane Katrina? This gift wasn't necessary, but was awfully nice. A dreadful day for fans of the Texans.

In another surprise, two time national champion Matt Leinart fell to #10 overall, where the Arizona cardinals happily claimed him. Leinart may be the best QB prospect since Peyton Manning, at least in terms of being able to start and contribute immediately. Shame on those teams which passed him over; he may be just what the Cardinals need to become a serious football team (finally).