Woody Allen doesn't get it.

At the recent Cannes Film Festival in France, the Hollywood legend was asked about the plight of fellow director Roman Polanski. Polanski, as you may know, was charged in California with raping a 13 year old girl in the early 1980s. He fled the United States and has since been living comfortably in Europe (primarily France), where he has continued his career, winning an Oscar in 2002 for The Pianist.

It’s something that happened many years ago...He has suffered, he has not been allowed to go to the United States. He was embarrassed by the whole thing...He's an artist, he's a nice person, he did something wrong and he paid for it. They [his critics] are not happy unless he pays the rest of his life. They would be happy if they could execute him in a firing squad. Enough is enough.

I have to wonder if Allen realizes exactly what he said. He 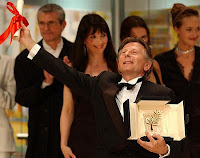 suggested - no, he unequivocally stated - that embarrassment is an acceptable punishment for raping a child. Is de facto exile from the United States - to live comfortably abroad while continuing a lucrative career - acceptable punishment? Should we not pursue criminal charges against someone who is a "nice person", evidence be damned?

Woody Allen is, like Polanski, an excellent filmmaker. But his notions of justice are bizarre, to say the least. True, if Polanski were to return to California and go to prison, that would still not be a "just" punishment for raping a child. But it would be a step in the right direction.

Kudos to actor Michael Douglas, who refused to sign a petition in support of Polanski (which Allen dutifully signed), saying that it would be "unfair" for him to sign a petition for "somebody who did break the law." I sincerely hope that the bulk of the Hollywood community and the rest of the American Radical Left favors Douglas' approach rather than that of Woody Allen.

The Christian faith is all about forgiveness, to be sure. But implicit in Jesus' call to discipleship is a call to repent that we might know forgiveness, both at the beginning of his earthly ministry and near its end. In fact, Jesus always connected penitence with forgiveness, and penitence carries with it the notion of "penance", a desire to be forgiven and to "make things right". Polanski can indeed know forgiveness for even this vile crime, but it seems to me that penitence needs to be a part of his plan if he is sincere. Being a "nice person", unfortunately, isn't enough.