Last Sunday, Speaker of the House Nancy Pelosi (D-CA) appeared on ABC's This Week with George Stephanopoulos. Speaking about the pending "economic stimulus" package championed by President Obama, Speaker Pelosi, and most other Democrat leaders, an exchange occurred which has since been spread all over the blogosphere...

STEPHANOPOULOS: Hundreds of millions of dollars to expand family planning services. How is that stimulus?

PELOSI: Well, the family planning services reduce cost. They reduce cost. The states are in terrible fiscal budget crises now and part of what we do for children's health, education and some of those elements are to help the states meet their financial needs. One of those - one of the initiatives you mentioned, the contraception, will reduce costs to the states and to the federal government.

STEPHANOPOULOS: So no apologies for that?

PELOSI: No apologies. No. We have to deal with the consequences of the downturn in our economy. 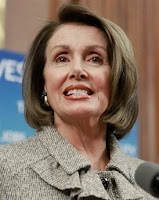 am not the only person in America who has found the Speaker's words very disturbing. I am pleased that, with the support of the President, these provisions have been removed from the package.

The initial television exchange, however, remains very disturbing to me because it shows a radical difference in worldview from my own.

Speaker Pelosi is a strong, vocal supporter of legal abortion, sometimes misunderstanding the teachings of her denomination (the Roman Catholic Church). It would not be surprising to see her vote for any measure which would support legal abortion or speak in support of such a measure.

What dismays me is that in the exchange with George Stephanopoulos, Speaker Pelosi seems to reduce "family planning" to economics. We need to support such measures, she claimed, because they will "reduce costs" to the government, and that these are simply "the consequences of the downturn in our economy." There is no mention of human rights or what might be best for the baby, the parents, or the family. "Family planning" has been reduced to dollars and cents. One might ask, "What is a baby worth?"

To be fair, Speaker Pelosi and the Democrats may not have been including abortion in the "family planning" section of the "stimulus" package; I have not read the proposed bills. She may only have been referring to condoms and birth control pills.

Even so, the Speaker's words tread on dangerous ground. I'm not ready to join those who have accused the Speaker of supporting eugenics, though her words may come close to doing so. I'm more willing to believe that she simply chose her words poorly...very poorly. But when we begin to think of babies and children in terms of economics and not in terms of their inherent worth as precious human souls for whom Jesus died, we take another step further on the road to dehumanization, and that can make eugenics and other atrocities possible.

Hey Keith, I gave you a link in my most recent post because I like what you wrote here.

One minor challenge I would give you is this, how many times can elosi say the same thing in different forums before you realize she did not just "misspeak"?

I think Pelosi's worldview is very clear and even if the bill was changed for political reasons, it does not change this view that reduces life to a dollar amount.