The Bush Legacy: The Good, the Bad, and the Ugly

his most important achievement is that he kept the homeland safe after the tragic attacks of 9/11/01. No more attacks when everyone thought another one was inevitable...that's good stuff. It also looks like Al Qaeda has been pretty much neutered in their ability to hurt or kill others, and the Taliban is effectively no more; these are good things for America, the Middle East and the world.

* "He stood athwart mounting global warming hysteria and yelled, 'Stop!' He slowed the movement toward a policy blunder of worldwide impact, providing time for facts to catch up with the dubious claims of alarmists. Thanks in part to Bush, the supposed consensus of scientists on global warming has now collapsed. The skeptics, who point to global cooling over the past decade, are now heard loud and clear. And a rational approach to the theory of manmade global warming is possible." - Fred Barnes, Weekly Standard 1/19/09

* The No Child Left Behind Act...far from perfect, Bush nevertheless tried to do something about the educational problems in this nation, and tried to do what previous presidents were too frightened to attempt: hold teachers accountable for their teaching.

* The Iraq surge. I am a pacifist and oppose all war, whether in Iraq or Afghanistan, or Clinton's forays into Kosovo and Haiti, or Vietnam and Korea...wherever. But Bush disregarded the advice of many so-called "experts" and initiated "the surge", which has stabilized Iraq and given that nation the hope of a free, democratic 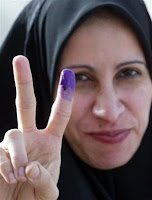 * Afghans - including long-persecuted Afghan women - participated in a free election for the first time in history. How could anyone fail to be moved?

* Cutting taxes is always a good thing, in my opinion.

* Bush delivered an astounding amount of aid to Africa, to fight poverty as well as the HIV/AIDS epidemic. Based on financial aid, no other president comes close in their commitment to the people of Africa; no other president has done more to combat the global scourge of HIV/AIDS. One would think that the Left would celebrate this achievement, but hate seems to blind them - at least for now - to this reality.

* While the hurricane was in no way his fault, the federal government's slow response to Katrina was disappointing. Bush could have been a more visible, vocal cheerleader. True, the 2005 disaster revealed absolute incompetence from New Orleans and Louisiana officials, who were primarily responsible for the failures of the relief effort, but Bush shares at least part of the blame for the confusion of the initial relief effort. See my post from 8/29/06.

* The current economic crisis has nothing to do with President Bush; it's no more his fault than it is the fault of Steven Spielberg or Captain Kangaroo. But the gigantic recovery packages he has obtained are ghastly, and will likely do little to stave off recession. My advice: Let the economy take its course...help those in imminent danger of death...and let

the culture determine its own financial path.

* "Mission accomplished" was obviously premature. It was not the best idea the White House ever had.

* Osama Bin Laden may be still at large. My own opinion is that he is dead, killed in the caves of eastern Afghanistan / western Pakistan when American bombs made that region resemble the surface of the sun. But there's no evidence, so it's fair to hold Bush accountable.

* Abu Ghraib. Bush didn't cause this tragedy or condone it, but a few bad apples in the U.S. military did this under his watch.

* Allowing torture to become acceptable practice in the attempt to obtain information. Torturing another human being cannot bode well for America, and is never acceptable behavior for a Christian. See my post from 10/28/06.

* Bush's biggest failure in my opinion was a terrible practice of communication.

In 2001, the President declared what became known as "the Bush doctrine" as a new way of dealing with foreign policy and war. Whether one agrees with the doctrine or not (I don't), and whether one understands it fully or not (news anchor Charlie Gibson doesn't...but then strangely chastised Gov. Sarah Palin for not knowing it either, in one of the 2008 election's more bizarre moments), the doctrine was to be the rationale for any efforts in the War on Terror and beyond.

But Bush did a terrible job of communicating this rationale as the war continued. Iraq was initially to be one front of the wider war, Afghanistan another front; Bush failed to communicate these as such. Because he was unwilling or unable to communicate the "doctrine" as it pertains to Iraq, his political opponents in government and the media were able to establish the "two wars" motif. Imagine folks in the 1940s failing to connect the fronts in the Pacific, Africa, and Europe as part of one greater conflict; that is almost impossible to consider.

The communication failures of President Bush resulted in the compartmentalization of these efforts, so that the American people view Afghanistan as one war, Iraq as another. This has been disastrous for Bush's approval ratings as well as for the GOP in the 2006 and 2008 elections.

It has largely affected his ability to accomplish other things, internationally and domestically. Ineffective communication must stand, therefore, as his greatest failure. And it's a big one.

Bush seems to be a good man of sincere Christian faith and upstanding personal character. He loves his wife, he loves his daughters, he has wanted to do what's right. He has experienced incredibly bad luck, with at least three events occurring during his tenure which could have destroyed any leader: 9/11/01, Hurricane Katrina, and the current economic crisis. He did some things well, others not so well. But I have never gotten the impression that he is mean or vindictive.

I believe that history will treat President Bush in a kind fashion, particularly if Iraqi democracy takes off. Those who claim he is the worst president in history know little about history. He is nowhere near the bottom of that list; neither was he able to reach the vaunted heights of Washington, Lincoln, or Reagan.

As Americans inaugurate a new President, let us pledge to pray for Barack Obama and continue to pray for George W. Bush, that both men will be safe and filled with the Spirit of wisdom and grace. 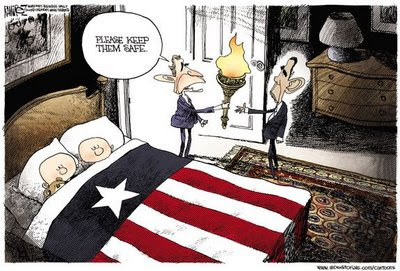 On the aid to Africa, I think one reason he hasn't gotten more credit is because many on the hard left are focused on their own perceived problems and are not paying much attention to global events. Meanwhile, many on the right have historically been uncomfortable with foreign aid, so they have not been eager to praise Bush for this.

On the global warming, Fred Barnes is mistaken. The scientific consensus is still as strong as ever. This decade has been, on the whole, warmer than the 1990s. Seven of the eight hottest years on record have occurred since 2000, and even a relatively cool year like 2008 ranks in the top ten.

But in general I agree with you: George W. Bush is a decent person who presided over a difficult time. He wasn't a great president, but we have definitely had worse.

An excellent analysis, my friend.

Spot on! Well done. Your analysis is cogent, balanced, well thought through.

Make sure you stay a UM. We need folks like you!