WASHINGTON (AP) - Supreme Court Justice Clarence Thomas said Tuesday that African-Americans are better served by colorblind programs than affirmative action. Thomas, addressing leaders of historically black colleges, said affirmative action "has become this mantra and there almost has become this secular religiosity about it. I think it almost trumps thinking." 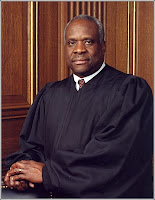 opponent of race-based preferences in hiring and school admissions, Thomas said, "Just from a constitutional standpoint, I think we're going to run into problems if we say the Constitution says we can consider race sometimes."

Thomas, 60, has voted on the court to outlaw the use of race in college admissions and in determining which public schools students will attend. He wrote with evident resentment in his autobiography "My Grandfather's Son" that he felt he was allowed to attend Yale Law School in the 1970s because of his race and took a tough course load to prove he was as able as his white classmates.

"My suggestion would be to stop the buzz words and to focus more on the practical effect of what we're doing," he said Tuesday.

"I can tell you when you have fudge words, it leaves a lot of room for mischief," he said. "People have a tendency to read their personal opinions into fudge words. You want, when it comes to the issue of race, absolute words."

Thomas also reminisced about his childhood in Savannah, Ga., when his sports heroes played at the historically black institutions because the flagship state universities in the South—with their big-time athletic programs—remained segregated.

He recalled as a seminal moment the night in 1966 when five black starters led Texas Western to the NCAA basketball championship over an all-white Kentucky team. "I remember sitting alone at the end of that game and saying something has changed dramatically in society," he said.

The coach of the winning team, Don Haskins, died Sunday.

I've long been a supporter of Thomas, and I have to say that I agree with him here as well.

In other words, "positive" racism (if that's even possible) is as evil as negative racism.

Racism is racism, even when a person means well. And we'll burn for it, brother!