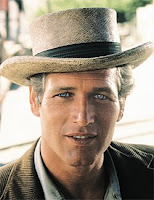 was one of filmdom's greatest actors. Nominated for bunches of Oscars (he was awarded 3), he was hugely influential on other actors and helped make several excellent films into iconic movie moments with his astonishing craft. My mother, mother-in-law, and wife all loved him for his physical traits. He died today of cancer.

His great performances are only part of his legacy. Newman was one of the first big Hollywood liberals, who donated to and campaigned for various liberal causes through the years, even making it onto Nixon's "enemies list". In our era, when so many obtuse celebrities try to make insipidly vapid "contributions" to the political arena, Newman evermore seems like the real deal. He walked the walk and talked the talk, doing more for charity than perhaps any other celebrity in history with the exception of Jerry Lewis. Additionally, the late Gil Kane, a comic book legend, modeled his character Hal Jordan (the second "Green Lantern") on Paul Newman.

Newman's greatest legacy is his family. When his first marriage ended after 10 years, he married actress Joanne Woodward, and they remained together for fifty years. He had six children; his only son died in the late 1970s from a drug overdose.

I'm sad that Newman has passed and I thank God for his life. He was an inspiration as a family man and as an activist; he helped the lives of so many people through his charitable work; he has left a rich film legacy matched by few other actors in screen history; he will continue to challenge and inspire for years to come.

Didn't hear about his death till I read your blog. His films are incredible...I think my two favorites are "Hud" and "Cool Hand Luke."

The world will definitely miss him, not only for his talent but for the wonderful things he did for the less fortunate.

The world will definitely miss him, not only for his talent but for the wonderful things he did for the less fortunate.