the two best teams in the NFC will square off as the Green Bay Packers head south to play the Dallas Cowboys. Both teams are led by quarterbacks who are having Pro Bowl seasons, with young talent Tony Romo lighting it up in Big D and aging football icon Brett Favre still doing what he does best. One of these two teams will be playing in the Super Bowl...where they will lose big to the New England Patriots. It's a great night for football in America!

Unfortunately, most of us will be unable to see this important game. The event is being televised on the new "NFL Network", which is not carried by many cable outlets. In my area, Comcast doesn't offer this channel, so I am just out lof luck. My brother and I are exploring the sports bar possibilities in the area.

If I want to watch this game, then I've got to think clearly, act quickly, and adapt to my current situation.

While I'm stewing and exploring, I'm also aware that this Sunday begins a new Church year, and the lectionary cycle begins anew, focusing on the Gospel of Matthew. This Gospel is a tour de force of Old Testament quotes, reinterpreted by the Gospel writer (and the early Church) in reference to Jesus. The Gospel writer thus was able to adapt...to take another look at the situation and make changes in order to accomplish a goal.

For example, what had been a prophecy for King Ahaz, reaffirming God's presence in his life and in the life of Israel (see Isaiah 7) was adapted to refer to Jesus, who was and is God incarnate in human flesh. Even God, it seems, was willing to adapt in order to accomplish his goals. 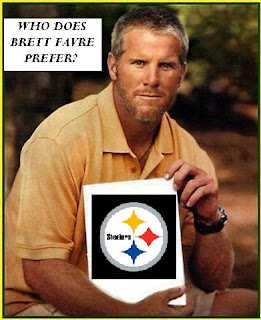 in football terms, this is what has made the legend of Brett Favre. He is a quarterback who has refused to simply work the play which is called, and instead is willing to scramble, look, and adapt in the hopes of keeping a doomed play alive. Yes, he has the all-time record for most interceptions thrown because of the way he plays the game, but he also has had tremendous success, has thrown for more touchdowns than any other quarterback in history, has a Super Bowl ring, and is a lock for the Hall of Fame.

So, how am I adapting? It's a postmodern world out there, and in many ways, I am very old-fashioned. In other ways, I suppose I'm pretty current. How do I balance who God has made me to be with the needs of my life and ministry?

How do I adapt to a world that doesn't understand "atonement" and "crucifixion" and "incarnation" and "resurrection"? Certainly, Scripture, liturgy, and the symbols of the Church can communicate in powerful ways; how do I use them most effectively?

I suppose I'm adapting tonight by watching the game in a bar ("Another Shirley Temple, please."). Maybe, just maybe, I'll learn a thing or two about continuing to adapt and, if I can say this without offending my more fundamentalist-minded brethren, maybe I can evolve, just a little bit.

If you really want to adapt, try and Long Island Iced Tea.

Keith...It's just another case of a big business cashing in by blackmailing cable companies into carrying their product.

As for the big NFC shootout. I am taking the cowboys to cover the spread. I think it's sort of a passing of the torch moment from Favre to Romo.

I think Romo's having a good year, but there's no passing of the torch. He's no Favre. He may never be even half as good. But he's having a really good season.

And, while I'd love for the Pack to win, I'm picking the Cowboys.