Always Something There to Remind Me... 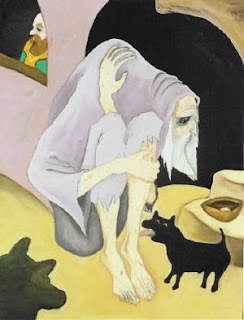 was a rich man, who was clothed in purple and fine linen and who feasted sumptuously every day. And at his gate lay a poor man named Lazarus, full of sores, who desired to be fed with what fell from the rich man's table; moreover the dogs came and licked his sores.

"The poor man died and was carried by the angels to Abraham's bosom. The rich man also died and was buried; and in Hades, being in torment, he lifted up his eyes, and saw Abraham far off and Lazarus in his bosom.

"And he called out, 'Father Abraham, have mercy upon me, and send Lazarus to dip the end of his finger in water and cool my tongue; for I am in anguish in this flame.'

"But Abraham said, 'Son, remember that you in your lifetime received your good things, and Lazarus in like manner evil things; but now he is comforted here, and you are in anguish. And besides all this, between us and you a great chasm has been fixed, in order that those who would pass from here to you may not be able, and none may cross from there to us.'

"So the rich man said, 'Then I beg you, father, to send him to my father's house, for I have five brothers, so that he may warn them, lest they also come into this place of torment.'

"But Abraham replied, 'They have Moses and the prophets; let them hear them.'

"The rich man said, 'No, father Abraham; but if some one goes to them from the dead, they will repent.'

"And Abraham said to him, 'If they do not hear Moses and the prophets, neither will they be convinced if some one should rise from the dead.'"

(Luke 16:19-31, RSV, adapt.)
As Jesus does so often, he painfully helps us to refocus on one of his great passions: ministry to, for, and with the poor. This time, in the midst of a conversation about financial stewardship and keeping the law, he proclaims in brilliant parabolic form that serving the poor can have an impact on our eternal destiny.

I am convinced that the Church is represented in this parable by the rich man. We are so preoccupied with so many things...good things...and we simply go about our lives...while Lazarus suffers. How many people in need did you drive past or near this week? What gives us the right to simply drive by while someone is suffering? I ask these questions as a guilty sinner. 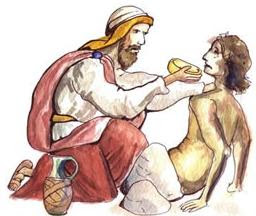 talk about growing churches...through evangelistic services, additional worship opportunities, new Bible studies, added technology...and I am guilty as charged. What if I could engage myself in ministry with the poor with the same vigor and passion I have for other aspects of ministry?

This passage, from the lectionary selections for the week, reminds me that Jesus never addressed building projects, technology, or additional worship opportunities. He never seemed to care how many people showed up for an event. But he was passionate about helping the poor, and in compelling those who would be his disciples to do the same.

Heavenly Father, I pray that by the power of the Holy Spirit you would gift me, Jefferson church, and Western PA Conference with the same compulsion your Son had for helping the poor, that we would be known not as people with open hearts, minds or doors, not as people on the cutting edge of technology, but as people who are passionate about serving those to whom the Messiah referred as "the least of these" in our world, through Jesus Christ our Lord. Amen.
at 5:50 PM

For a few years now I have had two passages repeatedly run through my mind.

Matthew 5:48 "be perfect therefore as your heavenly father is perfect" and James 4:17 "anyone who knows the good they ought to do and does not do it sins".

You are right on target as usual and I the whole thing reminds me of when the Bishop spoke at the Bishop on the Butler District where he said, "doing nothing means choosing death" in relation to church livelihood.

Keith -
Read my response to your question about "anti-liberal bias" at Bob Zilhaver's website. I totally support your concerns, 100%. Many times I hear pastors who are turned off when those issues are discussed, saying, "We should evangelize the poor but not become their enablers." As if true evangelism can happen without showing a concern for the whole person.
So, yeah man, I'm with you.
Jeff

Keith...you are good at getting to the heart of the matter. You inspired me to write a post today entitled "what things are really about."

I don't think this story is about "helping" the poor, as much as it is about using the wealth YHWH has given us for the glory of His Kingdom.

I would not want to imply that doing good for the Kingdom is antithetical to helping the poor, but the bigger question is do we use our wealth to win friends for eternity, or simply help people in the present?

I preached on this chapter back on Sunday, Aug 19 in a sermon titled, "Investing For The Future" if you care to listen.