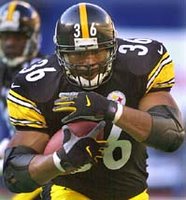 With the Steelers reporting to Latrobe next week for training camp, it's time for those of us in the McIlwain household to begin to get into "football mode" again. What a season it will be as the Steelers defend their Super Bowl title!

To set the mood, I'd like to post briefly about the Pro Football Hall of Fame. Of all the sports Halls, this seems the most "elite";

excellent players don't always make it into the Hall. Players need that certain "something extra" to enjoy induction.

As for future inductees, here are my picks as to "locks" (who are a sure thing) and other possibilities...