"...the Spirit led Jesus up into the wilderness so that the devil might tempt him. After Jesus had fasted for forty days and forty nights, he was starving. The tempter came to him and said, 'Since you are God’s Son, command these stones to become bread.'

"Jesus replied, 'It's written, People won’t live only by bread, but by every word spoken by God.'

"After that the devil brought him into the holy city and stood him at the highest point of the temple. He said to him, 'Since you are God’s Son, throw yourself down; for it is written, I will command my angels concerning you, and they will take you up in their hands so that you won’t hit your foot on a stone.'

"Then the devil brought him to a very high mountain and showed him all the kingdoms of the world and their glory. He said, 'I’ll give you all these if you bow down and worship me.'

"Jesus responded, 'Go away, Satan, because it’s written, You will worship the Lord your God and serve only him.' The devil left him, and angels came and took care of him."

- Matthew 4:1-11 (Common English Bible)
One of my favorite Lenten practices is watching a few of the several movies made about Jesus. We are blessed to have so many films at our disposal thanks to DVDs, Netflix, and TV cable offerings.

One of my favorite Biblical films is 1965's The Greatest Story Ever Told. Not a critical success and a bit dragging in parts, this movie nevertheless has one of the best portrayals of the devil ever portrayed on film. British screen legend Donald Pleasence 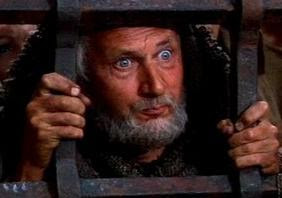 plays the devil as a hermit who seems almost an "everyman" figure. He is polite, soft-spoken, and seemingly kind...which makes this performance absolutely terrifying.

Were the devil to appear to me in all his dread - surrounded by flames, holding a pitchfork, hooves and tail apparent - I might be a bit frightened but not fooled. In Pleasence's hands, the devil becomes a figure easy to sit with, converse with, even befriend.

This is the devil of Matthew 4. He's not some monster from a Hammer horror film; he's not some superhuman demon from the infernal pits; he is...well, he's us. This is what makes the account of the temptation of Jesus so real.

Jesus may be tested by the offer of big dreams, but they are camouflaged by the commonplace, the ordinary, the everyday. What tests us are not typically outrageous schemes, but familiar, mundane habits - perhaps even with the approval or encouragement of an unbelieving world - which appear to be harmless but in actuality may have devastating effects on our souls, our witness for Christ or on those around us.

As we embark on the holy season of Lent, my prayer is that disciples of Jesus across the world are able to reflect not simply on the large issues of life, activism, and service, but also on the banal, the routine, the daily habits which prevent us from moving forward in holiness and in faithfulness to our crucified and risen Lord.
This post is part of the 2011 Lenten Blog Tour
sponsored by the publishers of the Common English Bible.
at 6:15 AM

Well said, and very appropriate. I join you in your prayer.

Keith,
I think those mundane temptations are really deadly. The core of temptations -big or small- is diminishing God in our lives. That eats us up. We really do need some serious prayer and self-reflection! I join you in your prayer, too! Thanks for such a thought-provoking post. Abundant blessings!

An excellent observation! We're seldom called upon to do epic deeds of goodness and our temptations are usually not earth-shattering either. The place we are most often asked to be faithful is in the mundane, prosaic affairs of life.

I am struck with the thought that the devil in the story is us. How often do we put ourselves into the story in that role--Throwing scripture at God, commanding him to act in a certain way?

Thanks, Keith! My facebook fast has been confirmed as something I need to do during Lent because it is one of those small distractions that sucks up my time that I could be using for being in God's Presence and studying.

"the banality of evil" as Arendt quipped is frightening and deadly. Thank you for starting our Lenten journey!

Thank you for setting the tone so well. "... to reflect on ... the daily habits which prevent us from moving forward in holiness and in faithfulness to our crucified and risen Lord." Amen!

well written Keith, I actually read this before and didn't realize you wrote it. Now that I know you're the devil, I'm disappointed. I always thought you'd be scarier.

the camouflage of the mundane, great point! reminds me of the closing line from the movie 'The Usual Suspects'..."The greatest trick the devil ever pulled was convincing the world he didn't exist."

i believe that the devil is simply divine illness. de v il, so i guess even the devil is in need of healing and deliverance, like the gadarene, So he can be in his Right mind. Here we are running around naked (spiritually speaking) throwing ourselves in one fire after another, walking among the "tombstones" (others like us that are carnally minded, to be carnally minded is death), hiding in caves of fear and darkness, separated (only in our minds) from God. Be ye not as the Gentiles, separated in your minds.Ephesians 4:17-18 So where is God? I say He is where ever we are. King David had the revelation that "if I ascend to heaven, You are there; if I make my bed in hell,You are there." So who was Jesus actually faceing? Was He not faceing the lower nature on the planet, the first man, the one out from the earth (earthly minded). 1 Cor. 15:47 the same one we face,(however there is another Man) but the second Man (is) the Lord out of Heaven.AMP So where is God again? He's in us as a Revelation, a Truth ,Way And Life,(as a virgin Truth) a Love waiting to be reborn revealed resurrected renewed redeemed restored replenished returned re-membered. Re is an awesome little prefix huh? Thats cause its already been pre-fixed before the foundations of the world. He placed Himself in us before we came here in order to heal Himself and impart divine knowledge to others about Himself as He is awakened and begins to grow, so that we would all come to the full knowledge or stature in Christ Jesus. Isaiah 53:11 David saw the revelation.... Jesus became the Revelation and is waiting again to be greeted with a sacred Kiss(Word of God, Truth,and Grace and Light) so that He may Come Again in Us as Us to set creation free.He is the Son of David, the Son of Man and the Son of God. He is born out of all three in Order to LIVE. He says,"I am the Truth Way and the Life", a child is born, but a Son is Given to redeem that which is lost and to re-member man back to His former estate (of Mind) in Heaven and do the works of His/Our Father on earth as it is in Heaven. All creation groans for the manifestation of the Sons of God. John 1:1 "In the beginning...." Let this mind be in you.Please, its your inheritance. So we may be the devil in a temporal sense, but He that is Within me is greater than he that is in the world. And where is the Kingdom of Heaven?..... And by Resurrection of His Spirit and the renewing of our minds, we are One in Him in the end (of us, our understanding is the obstacle).John21:21-24 Cause thats who we were when He knew us before the foundations of the world, we came from God right? We are the Body of Christ Right? And He is our home. Why do they say that when we die that we go home, how can it be home if we have never been there before.Yes we must die in a sense, but it is only a death to and of death itself(carnal mindedness, vanity, ego). When death is dead then there is only Life and Life more abundantly!Sin is separation ,Righteousness is Restoration. The carnally minded killed Jesus then, but He just keeps getting back up, again and again in a remnant.Please selah.....I will tell you this, He Will Show you the Truth.... So we no longer know Jesus by the flesh, but as Spirit and Life and these are His Words and I will worship Him in Spirit and Truth,by telling the Truth) Be a berean, work (study it out).Remember, He doesn't come to condemn us, but to save us from death hell and the grave.( He opens our graves or minds) So the devil may be in disguise,but he is destined to die only to be born again. And Jesus is King of Kings and Lord of Lords (us), we just don't know it yet, or do we? He, Who is, Who was and Who is to come. The First and the Last.Wisdom is ancient and she has always been. We are not pre-destined to go to hell but to come out of hell on the wings(thoughts and revelations) of God!It is Gods will that none perish.His Will, will super-seed and a harvest Will be taken from the earth!Salvation is of the Lord! Not of mans mind.Be Blessed.

This is the personal blog of
Keith H. McIlwain.
The views and opinions represented
are his own,
and do not necessarily reflect
the positions of
Slippery Rock United
Methodist Church,
the Western Pennsylvania Conference,
Hall of Fame linebacker Jack Ham,
Dr. Winston O'Boogie, Carter Hall,
the Wesleyan Covenant Association,
the Global Methodist Church,
or The United Methodist Church.
But maybe they should.
I'm just sayin'.