The Scandal That Doesn't Need to Be

The recent news that the Obama White House may have offered jobs to Democrat candidates Joe Sestak and Andrew Romanoff if they chose not to run for office against fellow party opponents seems to be gaining steam. Almost every day, a new bit of information is revealed, and it's looking more ugly.

In my opinion, however, this does not (or did not) have to be a major scandal. It 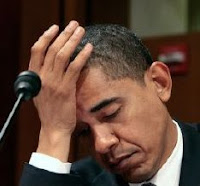 may well be that folks in the White House were simply not aware of a law that, while important, is relatively obscure (at least to the public-at-large). Frankly, I'd never heard of this law, which prohibits job offers to potential candidates (considered institutional interference in democracy), prior to the Joe Sestak story. I assumed that this sort of thing happened a lot in BOTH parties, regardless of how dirty it looks.

True, ignorance of the law is no excuse, especially from the branch of government which exists to enforce the law. But I sincerely doubt that President Obama meant to do anything illegal in this instance; my gut feeling is that the people around him failed to act and advise appropriately. The president seems to have surrounded himself with some pretty mistake-prone people, in my opinion, and they've often given him some bad advice.

But the incident has been handled poorly from Day 1. I wish the President would simply have pulled a mea culpa, admitting that something inappropriate had occurred and that he was holding the proper folks accountable. A few firings could then have stopped the story dead in its tracks. Instead, we've gotten mysterious denials, incomplete statements, and a total lack of clarity. This relatively minor issue did not have to become a major scandal, but it is becoming such because of poor handling.

The other thing that bothers me about this story is the assumption that a political opponent is involved in scandal. Not every President is personally corrupt a la Nixon or Clinton. Bush and Obama, for instance, seem to be two decent men with whom I have disagreements, and who both have made mistakes. Both, however, have seen their opponents assuming the worst. The constant search in Washington for "the next scandal", the presumption that one's opponent is also one's enemy and that he/she must be up to no good is no way to run a nation. I pray we get to the point where we can disagree without assuming our opponent is evil or their administration scandal-ridden rather than simply wrong.