Rerun: A Wesleyan Response to Inerrancy

The subjects of Biblical authority and inerrancy were topics of conversation at a recent meeting of the Pittsburgh District Committee on Ordained Ministry, a team on which I'm blessed to serve. This post was originally posted 10/16/2006, but I thought it appropriate to post again as "food for thought" to any interested readers.
____________________________
Donald Haynes of Hood Theological Seminary has written a column for The United Methodist Reporter in which he deals with the question, "Is the Bible literally the Word of God?" In the article, Haynes strongly affirms Biblical authority while essentially rejecting the notion of "inerrancy".

The belief that the Bible is "inerrant" is a Calvinist doctrine which, 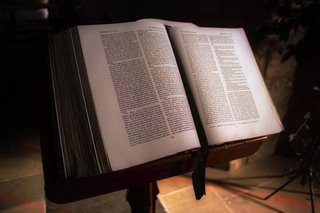 while "in the mix" since the 16th century, wasn't formalized until the early 20th century. In the light of the 19th century development of "modern" Biblical criticism, conservative Christians (who were soon dubbed "fundamentalists") declared a belief that the Bible is inerrant in order to combat the affect that modern criticism was having on the notion of Biblical authority. By the 1970s, many evangelicals had established the idea that inerrancy was one of the real tests of evangelicalism.

The problem is that historically speaking inerrancy has been foreign to Wesleyan theology (as demonstrated by Wesleyan theologians Dennis Bratcher, J. Kenneth Grider, and Gregory Neal, among others). The reason for this is that Methodists, from Wesley's day until today, have been primarly concerned with the soteriological message of Scripture; what does the Bible say about the salvation message?

The fifth of the Methodist Articles of Religion, entitled "Of the Sufficiency of the Holy Scriptures for Salvation", states in part:

The fourth article of the Evangelical United Brethren Confession of Faith similarly states, in part:

We believe the Holy Bible, Old and New Testaments, reveals the Word of God so far as it is necessary for our salvation. It is to be received through the Holy Spirit as the true rule and guide for faith and practice. Whatever is not revealed in or established by the Holy Scriptures is not to be made an article of faith nor is it to be taught as essential to salvation.

Obviously, no mention is made of the notion of inerrancy, which is predated by the Methodist Articles.

Inerrancy has, at times, actually led to idolatry and sin. A common side effect of inerrancy has been termed "bibliolatry". The Bible is inspired and authoritative, but it is also a book written through the agency of human beings. Many who affirm inerrancy are aghast at the notion that the Bible is a very human book.

Christian orthodoxy has affirmed for centuries that Jesus was/is both fully divine and fully human; in fact, this affirmation is a legitimate test of orthodoxy. He wasn't "more God" or "more human"...he was fully both.

Why, then, do so many of our sisters and brothers who affirm 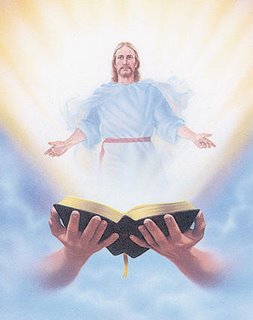 inerrancy reject the idea that the Bible can also be a fully divine book as well as fully human? Frankly, to reject the human side of the Bible is to place the Bible above Jesus, which is clearly sinful. Jesus is the Lord of Scripture, and is himself above even the Holy Bible.

I have found it useful in my personal understanding to differentiate between Jesus as the one true Word of God (with a capital W) and the Bible as the living, active, supernatural word of God (with a lowercase w). Both are from God, but one is certainly superior to the other.

What, then, are we to say as Wesleyans about inerrancy?

First, we can strongly affirm Scriptural authority. The Bible is inspired by God and is essential, and is authoritative for the Church. It does indeed contain all that is necessary for salvation and, as such, we need to cling to the message of Scripture and live in its gracious words, allowing the Spirit to shape us and remake us using the Bible. (Anglican Bishop N.T. Wright, probably the top New Testament scholar on the planet today as well as one of the top evangelical theologians perhaps ever, has some good words to say about Biblical authority, while rejecting inerrancy.)

Second, we can be gracious to our sisters and brothers (generally of Calvinist persuasions) with whom we disagree regarding how best to define the ideas of Biblical inspiration and authority. We need not disparage those who do affirm inerrancy, even as we live in another room of God's house.

Third, we must see to it that modern Biblical criticism is responsibly applied. We have much to learn from Biblical critics, but too often their work is used to demean or belittle the Christian faith or important doctrines of the faith. Wesleyans have a responsibility as "Bible moths" to defend the Scriptures and see to it that criticism is applied properly. John Wesley once wrote, "The Church is to be judged by Scripture, not Scripture by the Church."

Fourth, we need to be "on guard" regarding the idolatry of bibliolatry. Most folks who commit this error do so unawares. While we must guard orthodoxy, we must do so in a loving way, graciously correcting and instructing our Christian brethren.

Finally, we need to focus on our mission, which is also the Bible's purpose. Our mission is to make disciples of Jesus Christ, and the Bible exists not that we might prove scientific details or historic happenings which don't even matter (in terms of the big picture), but that people might believe. As I said to a Presbyterian colleague in my seminary years, "We United Methodists are content to let you all and the Baptists worry about inerrancy; we're too busy saving souls." That was my smart-mouthed way of putting the debate into perspective; we should not be distracted by these interesting but ultimately silly debates when the task at hand is of such great import.

O Father of all the nations of the earth: Remember the multitudes who have been created in your image but have not known the redeeming work of our Savior Jesus Christ; and grant that, by the prayers and labors of your holy Church, they may be brought to know and worship you as you have been revealed in the Bible, your word, and preeminently in your Son, the Word; who lives and reigns with you and the Holy Spirit, one God, for ever and ever. Amen.

Ben Witherington's book The Living Word of God makes a lot of the same points. It's a good read. A Nazarene friend of mine has a good story about affirming their doctrinal stance in the face of inerrancy. I mean interesting, not good.

Sept 25-27, 2019
in Nashville, TN
--
This is the personal blog of
Keith H. McIlwain.
The views and opinions represented
are his own,
and do not necessarily reflect
the positions of
Slippery Rock United
Methodist Church,
the Western Pennsylvania Conference,
Hall of Fame linebacker Jack Ham,
Dr. Winston O'Boogie, Carter Hall,
or The United Methodist Church.
But maybe they should.
I'm just sayin'.