Last night, the Detroit Red Wings beat the Pittsburgh Penguins to win the Stanley Cup. It was the fourth NHL championship in 11 years for this veteran hockey team. Without question, they are the best team in professional hockey in the 2007-2008 season.

But, I want to take a moment to thank the Penguins. This hockey season was one of the most exciting sports rides, in my opinion, in Pittsburgh history. It was a real joy to watch it and, at times, be a part of it. It was a lot of fun, and Pens fans everywhere should be rejoicing today, even as we feel the sting of losing the ultimate hockey prize. 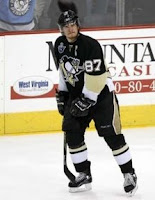 season, the young Penguins lost in the first round of the playoffs, but demonstrated that they were a team to watch in the future. Led by 20 year old Sidney Crosby, the best player in the world, the team was poised this year to go deep in the playoffs and make a lot of noise.

Then, starting goalie Marc-Andre Fleury got hurt, and was out for months. Miraculously, journeyman goalie Ty Conklin stepped in and did a phenomenal job of filling in. On New Year's Day in the outdoor "Winter Classic" game in Buffalo, Crosby played brilliantly in adverse conditions, winning the game in a shoot-out, even while leading the NHL (at the time) in assists (in the last season, he'd won the league scoring title).

A few weeks later, Crosby was hurt in a game against the Tampa Bay Lightning. While he recovered, Evgeni Malkin emerged as one of the league's leading scorers and a new superstar. The Penguins just kept overcoming adversity to find success.

Perhaps what has been most special about the Penguins, particularly this season, has been the fact that they have really become a part of the Pittsburgh community, moreso than the Steelers or the Pirates, in my opinion. The Pens have really made an effort to serve their fans and reach out to them. Even yesterday, with the game coming up in just a few hours, I ran into leftwinger Pacsal Dupuis in Giant Eagle, where he was happily signing autographs and shaking hands even while he picked up milk and bread. The Pens have embodied the principle of immanence, and are beloved for it.

The Pens also emerged this season with colorful characters which are a hallmark of Pittsburgh sports.

Crosby, Malkin, and Fleury are the uber-talented superstars, of course, but their supporting cast is filled with interesting players loaded not only with talent but with guts and with heart...Hal Gill, Sergei Gonchar, Marian Hossa, Georges Laraque, Ryan Malone, Brooks Orpik, Gary Roberts, Jarkko Ruutu, Jordan Staal, Petr Sykora, and others. Several might sign with other teams for significantly more money in the offseason, but it has been great to have them on this team.

What a season. I was able to enjoy the entire season with my daughter Kate, who became Pens-obsessed, and the rest of my family, who also lived and breathed hockey for the last two months. Though the Pens dominated the Eastern Conference, they lost to a team with veteran skills and talent which earned the title of "champion". The future is bright for the Penguins, though the pain is real today.

I really have no point in this post other than to simply say, "Thank you, Penguins", to thank God for this exciting season, and to look forward to when the puck drops again in October.

And, by the way...the Steelers report to Latrobe for training camp on July 27.

I've been studying abroad in Australia, and nothing made me more homesick than the Penguins, because I knew that while everything else was gonna be there when I came back, I was missing the phenomenon that was the Cup playoffs.

I've loved the Pens for as long as I can remember, I've stuck with them through the tough times, and now I got to be the crazy American who keeps talking about some team from city that half of Australia hasn't heard of. They made me proud to be a Pittsburgher and gave me a powerful link to home. The loss was gutwrenching, but they gave me two months of excitement in the meantime.

I'm so glad to hear that hockey is finally getting its due in the 'burgh. The ability of the Penguins to reach out to younger people means that the culture is changing, and when we have careers and money for tickets, we're gonna say "screw the 30 year waiting list for the Steelers" and back the guys who handed out pizza to us while we stood in the student rush line.