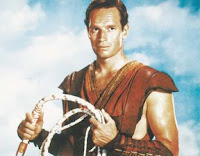 Charlton Heston, one of filmdom's most illustrious actors, passed away yesterday after a long battle with Alzheimer's Disease. He won an Oscar for 1959's Ben Hur, the definitive Hollywood epic. He is also well known for his larger-than-life roles as Moses in The Ten Commandments, Taylor in Planet of the Apes, Michelangelo in The Agony and the Ecstasy, John the Baptist in The Greatest Story Ever Told, General Gordon in Khartoum, Neville in The Omega Man, Cardinal Richelieu in The Three Musketeers, El Cid in El Cid, and Thorn in the underrated Soylent Green.

Heston has been one of my favorite Hollywood actors for some time. Like many in my generation, I was first exposed to his work every Easter, with the annual showing of The Ten Commandments on network television. Later, as a teenage oddity steeped in sci-fi geekery, I marveled at Planet of the Apes and, eventually, Soylent Green (which remains one of the most sophisticated sci-fi movies ever filmed). 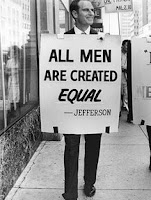 It was only as an adult that I learned to love Ben Hur, a masterful film with one of the best portrayals of Jesus in Hollywood history, which featured a tour de force performance by Heston.

But Charlton Heston was more than just another star; he was a Christian activist fighting for what he perceived to be right...long before it became chic in Hollywood to lift up one's favorite cause. Best known today as a conservative stalwart who headed the National Rifle Association (which, in my opinion, was his all-time scariest role), he also marched with Martin Luther King and was an early Hollywood opponent of racism and segregation (along with, it may surprise some, John Wayne). He opposed both Marxism and McCarthyism as threats to liberty. As an elder statesman, he spoke out against abortion and political correctness, to which he referred as "tyranny with manners".

In 2002, Heston was diagnosed with Alzheimer's Disease, the tragic condition which eventually claimed the life of his close friend, Ronald Reagan. His appearances in recent years were rare.

I'm thanking God today for the work of Charlton Heston. I'll be able to enjoy his movies with my children and (someday) grandchildren for years to come. If you're not familiar with his film work, I commend it to you.

I'm also thanking God for Charlton Heston's example as a Christian activist. My opinions may differ with Heston on some issues, but he never shied away from standing up for what he believed was right, even if it meant being ridiculed by some of the cultural elites. He stood up for basic human rights in a very confusing era, in a very confusing place. We can all learn something, I think, from this very gifted man.

He was a great man, and a great friend to all who love the USA.
Fear not the NRA, for they train your beloved police firearm instructors. Fear instead those who would suppress the inalienable rights, any of them, especially those from the Bill of Rights. This is what Heston believed most of all.

Keith,
Great remarks. I hadn't heard of his death until I read your blog. Heston was definitely a Christian hero for our times.
Jeff

He made some great films and did a lot of good things with his fame.

I hope to see him in eternity!

it's so funny about soylent green, i think i read the book as a teen and then later saw the movie. flipping channels one day it was on and my daughter perked up and said hey - soylent green is people! now i know what that means!
turns out, in this beauty queen movie one of the contestants does a soliloquy in the back ground of one the lead's scenes that ends with her shouting 'soylent green is people!'