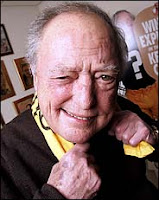 died this morning in Mt. Lebanon, PA. Western Pennsylvanians will surely know Myron as the longtime radio "voice of the Steelers", the man who created the "Terrible Towel", and a man who was as much a fixture of the "Steelers Nation" as the Rooney family and the old steel mills.

Myron was an award-winning journalist for Sports Illustrated but really rose to fame announcing Steelers games in the 1970s. He was an integral part of the Steelers mythos as they won four Super Bowls in that era, becoming the greatest dynasty in NFL history. He is as important to the pride of Pittsburgh as Gene Kelly, Fred Rogers, Andy Warhol, and August Wilson, and (almost) as important a figure in Pittsburgh sports as Terry Bradshaw, Mean Joe Greene, Chuck Noll, Roberto Clemente, and Mario Lemieux. He was inducted into the National Radio Hall of Fame in 2005, the same year he received the Pete Rozelle Award from the Pro Football Hall of Fame for his contributions to the game.

"He doesn't play, he doesn't put on a pair of pads, but he's revered probably as much or more in Pittsburgh than Franco, all the guys," said Jerome Bettis. "Everybody probably remembers Myron more than the greatest players, and that's an incredible compliment."

Like many Steelers fans, I often watched the TV broadcast of the games with the volume turned down, turning to Myron on the radio to get a more "authentic" Steelers experience. His retirement a few years ago was a sad day. I'm glad my kids got to hear Myron a bit before he retired; his voice, antics, and personality are a part of my childhood I'll treasure. Hearing his voice still takes me back. Today is a sad day for the Steelers Nation.

I understand that he was also a better writer than he was a radio guy. Cope will be missed. Waveing the Terrible Towel in his honor. . .