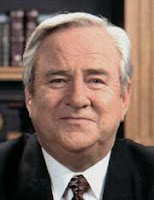 Falwell has, in my lifetime, been one of America's most controversial Christians. His achievements are impressive: the founding of a church which now has over 24,000 members...founder of Liberty University, now a major institution with almost 20,000 students...important regional ministries for women in crisis pregnancies and people addicted to drugs and alcohol. For good or for ill, Falwell is also largely responsible for organizing the "Religious Right" in America, by starting the so-called "Moral Majority" in 1979.

I'm not sure I completely understood Jerry Falwell. In addition to his more positive achievements, he opposed the civil rights movement of the 1950s and 1960s (a position for which he later apologized), he supported the apartheid regime in South Africa, and he blamed abortionists, feminists, and gays for 9/11 (a claim concerning which he later apologized). I believe it to be astronomically silly to waste time on, say, the color of the Teletubbies or whether or not we should have organized prayer in schools, yet these are also part of Jerry Falwell's legacy.

In short, I believe Jerry Falwell to be one of the last of a particular generation of politically-minded Christian leaders who dominated the American Church in the last decades of the twentieth century (I'd include Jesse Jackson, Martin Luther King, Pat Robertson, and Billy Graham on that list). Those leaders have largely been replaced by leaders who are generally far less political, such as Bill Hybels, T.D. Jakes, Max Lucado, Brian McLaren, and Rick Warren (McLaren and Jim Wallis are exceptions to the "less political" observation).

I believe that Jerry Falwell loved Jesus and had a sincere faith journey, and tried to do the correct thing (as he saw it) to improve the United States. At times too harsh in his approach and often a seeming caricature of himself, I nevertheless find myself today thanking God for the ministry of Jerry Falwell. He was far from perfect, his legacy problematic, but he endeavored to be faithful and very traditional, and tried to do good. We should all thank God for that.

Falwell was controversial and said many things which were not thought out. I also think he is partly responsible for evangelicals being labeled by the issues of homosexuality and abortion. The tag will die very hard. But all in all I agree with you. He did what he thought was right and stood proudly for his beliefs.

Falwell was most definitely controversial.

I may not have agreed with all of Falwell's actions and I have not thoroughly studied his theology, but I am ashamed that there are not more Christians in the world willing to take stands for what is believed to be right in this age of Jellyfish.

Of course there is always a balance that can be overlooked, but I wonder if the American Christian culture is going overboard on the side of individualism, subjectivism, and stressing the Love of God more then the balance with oneness, unity, standards and at least partial objectivity, as well as righteousness, truthfulness, and justice.