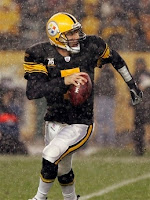 To say that the Steelers were dominant doesn't tell the tale. They embarrassed the Ravens, and did it in spectacular fashion. Ben Roethlisberger was nothing short of magnificent, throwing for 5 touchdowns and finishing the night with a 158.3 passer rating. He proved that, while Brady and Manning are clearly the best two QBs in the NFL right now, Roethlisberger is third (with the legendary Brett Favre not far behind).

the defensive side of the football, linebacker James Harrison had a tremendous night. 9 tackles...3.5 sacks...3 forced fumbles...a fumble recovery and an interception...Harrison did it all. No defensive player in the NFL had a performance this weekend that was as dominant; Harrison owned the Ravens, as well as Week 9 of the 2007 NFL season.

What made the night so special, though, wasn't just the great victory. The night was special because of the presence of so many Steelers legends who came back for the game to help celebrate the team's 75th anniversary. These men were gods in western Pennsylvania while I was growing up; before children could name the four Gospels, they knew Rocky Bleier, Mel Blount, Terry Bradshaw, Mean Joe Greene, L. C. Greenwood, Jack Ham, Franco Harris, Jack Lambert, Chuck Noll, John Stallworth, Lynn Swann, and Mike Webster. These men were part of the greatest single team in football history, and remain the greatest of all NFL dynasties (as noted by Redskins fan Tony Kornheiser). To see Big Ben, Hines Ward, Troy Polamalu, James Harrison, and the rest of the current team put on that kind of show for those beloved legends was wonderful.

One more thing was confirmed last night. The Patriots and the Colts are the best two teams in the NFL (in that order, with apologies to Indiana John), but the Steelers are third, hanging right there with them (I suppose the Cowboys, the Packers, maybe the Giants, and, oddly enough, the Lions bring up the rear). If they play their best, and have some luck thrown their way, it's possible that Mike Tomlin's Steelers could be playing in the Super Bowl in a few months. Let the praying commence.

Awesome game. I'm just surprised that you have enough energy today to write that much! Even after only watching three full quarters, I am dragging!

Have a great day.

It was AMAZING for all the reasons you said. I watched it with my 7 year old son, and felt like I was passing the love of the game and the Steelers from the old guys to the new!

One question, Rossem at the end almost ran it back for a TD. To be honest, it looked like he ran out of bound on purpose so as not to add one more TD to an already dominant performance. What do you think? Was he a class act, or did the punter really run him out of bounds?

I thought the game was fantastic, I was worried my cheering would wake up my daughter the whole time.

I agree that those Steeler teams
are the best ever. I wish the
Steel Curtain could play against
the Patriots right now.

Slight disagreement: Big Ben
is playing very well right now,
but Favre is first ballot lock
for the Hall of Fame even if he
did not play this year. This year
he is incredible and without him
the Packers would not be 7-1. Right now they are 7-1 without a
running game and it is due to him.
So I'd have to put him above Ben.

Joe - I can only give you my opinion as far as the punt return. My own view is that when you're up significantly as the Steelers were, you don't give up on scoring. You should still try and score, though, granted, maybe not so aggressively as to risk injury. My guess is that Rossum wasn't going full speed, because there was no need, and had the punter not forced him out, he would've been glad to run it in for a touchdown.

Clay - I agree that all-time, Favre is better than Big Ben. No question. And he's having a GREAT year...maybe another MVP year (esp. if Brady & Moss split the vote). I'm a big fan of #4; so is my wife, for reasons less than pure. But I still think that Roethlisberger is the third best QB in the game RIGHT NOW. I'd put Favre next, followed by Brees, Romo, and maybe Kitna. But on the all-time list, Favre is Top Ten. Fair?

Who would be your Top Ten?

Before that, you're talking about people like Baugh, Graham, and Tittle, who were great but who really played a very different game.

I like what Steve Sabol of NFL Films said: "It's like picking your favorite saint. Is St. Matthew better than St. Paul?"

Spot on! Sabol is right. I'd have
to throw in Jurgenson of the Redskins.